A Tribute to My Mom – An Example to Live By

Okay, I admit I may be a little bit prejudiced, but my mother is the best mom in the world. Her name is Mary Owens and she turned 79 years young on April 4. She was born in Avinger, Texas, population 600, as the youngest child and only daughter of Marshall and Florence Felker. They named her Mary Frances, but her two older brothers called her Sis, and that is the name that has stuck with her to this day. (As a sidenote, she wanted to be called M.F. when she was a girl – something she laughs about today given the popular meaning.)

A third generation Texan, she has a personality that reminds me of former Texas Governor Ann Richards – classy, witty, fun to be around and someone who can turn a Texas expression with the best of them. When the temperatures go below freezing, it’s not just cold – it’s colder than a well digger’s ass in Butte, Montana. Someone is not just anxious or jumpy – they are as nervous as a whore in church.

My mother taught me a lot of valuable lessons in life just by her own example of living. Some of them: 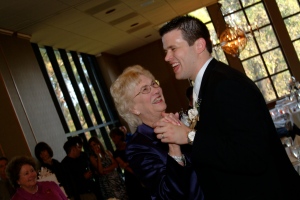 Dancing with her oldest grandson Thomas Torma on his wedding day, October 2008.

Stay young at heart. My mom graduated from the University of Texas with a music degree, but after teaching a few years, she stayed at home to raise me and my older sister and younger brother. She was one of those “hip” mothers that my teenage friends wanted to be around. She stayed current with the latest songs and wasn’t shocked by the changing pop culture. I’ll never forget when a photo of former Vice President Nelson Rockefeller holding up his middle finger to young voters at a rally in 1976 appeared on the front page of the Dallas Morning News and my grandmother asked her what it meant. Of course, my mom knew the meaning and had used the gesture herself occasionally, but she told my grandmother it meant “go to hell.” Once, after a summer visit with grandma, my middle son, who was probably six at the time, asked me, “Did Meemaw cuss when you were a little girl?” My children still laugh about her chasing them with a flyswatter if they misbehaved. Today, they think she is as cool as my friends did back in the ‘60s and ‘70s.

Give back to your community. Although a stay-at-home mom, she was a tireless worker and community volunteer. When a botanist from East Texas State University discovered there were more species of wildflowers in the triangle of little towns in Cass County where we lived, my mother co-founded the Wildflower Trails of Texas, a yearly community festival held the last weekend in April. It is still in full swing 39 years later. She was the first woman to serve on the Avinger ISD school board in the 1960s. When my father died in 1997, she moved to my grandparents’ home within the city limits and finally was able to run for city office. She served on the city council for six years and became the first woman mayor of Avinger at the age of 74.  She has probably held every lay office in the United Methodist Church, not to mention playing as church organist for more than three decades in the Methodist church where I grew up. She continues to teach Sunday school and serves on the church Finance committee. She also manages the family timber business with my brother. To say I’m proud is an understatement.

Change happens, life happens; so roll with the flow. My mom has never been afraid of change or believed in hanging on to the past. She keeps in touch by email and was sending text messages to her grandchildren long before I had the feature on my cell phone. If the family has a “crisis” (and there have been a few!), she doesn’t dwell on it. Sure, she may be concerned or upset, but after it passes, her standard comment to me is, “Well, there’s another chapter for the book.”

With grandchildren and great grandson at my grandmother’s house, Christmas 2006.

About five years ago, we had our last Christmas Eve celebration at my grandparents’ home in Avinger because my mother decided to move to another town to be closer to my sister. Being hopelessly sentimental, I sadly commented that this would be our last Christmas celebration in a home that for me held more than 50 years of memories. My mother looked at me over her wine glass and in classic fashion said, “Move on.”

Fight for what you believe in. My mom grew up in an era and in a part of the state where the civil rights movement moved at a snail’s pace. She told me recently she remembered as a little girl in the 1930s going downtown on election day and seeing a dummy in a noose hanging in front of the town’s polling place with a sign that said, “This ‘n-word’ voted.” She thought it was a grave injustice then and the terrible memory seems seared in her consciousness still today. So fast-forward 70 years later when she came to town on Martin Luther King Day and saw that the city secretary was working on the national holiday. At the next city council meeting, my mother made a motion to declare MLK Day a city holiday and it was narrowly defeated. She was incensed. Realizing the all-white council needed some minority representation, she encouraged a young African American woman to run for city council the next election. She did and won. Guess what: MLK Day was voted as a city holiday shortly afterward. I saw the woman a couple of weeks ago when I went back home for the Wildflower Trails and she told me she was still on the city council. I’m proud my mother stood up for what was just and made a difference in a community not known for embracing change.

While moms can teach us important lessons in life by imparting wisdom and advice, I believe HOW they live makes a greater impact. Because of my mother’s willingness to stay forever young, I formed a soccer team when I was 40 even though I had never played sports in my life. (BTW, I never learned to play the game, but I loved wearing the uniform!) There’s no doubt her community activism impacted my ongoing 15-year labor of love to save a community green space that is now a Harris County park. And while we often disagree politically, I know her determination to stand up for what she believes in influenced my decision to serve as a delegate to the Democratic state convention last summer and spend 12 hours on election day as a clerk in last November’s historic election.

So Happy Mother’s Day, Sis Owens, and to all the other mothers out there who are setting examples to live by!